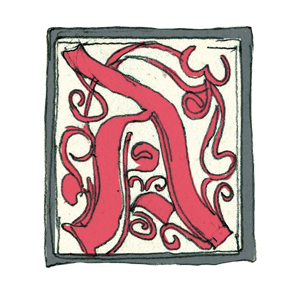 From Alpha to Omega

One of the four requests of the Bohemian reformation was to provide believers with a bible they could read for themselves. Therefore in 1613 a bible translation was printed in a hidden print shop in Kralice (Kralitz) in southern Moravia; the initial A reproduced above adorns the beginning of one of its chapters. Named after its place of origin, this book, the “Bible of Kralice”, became the authoritative bible translation from Hebrew and Greek into the Czech vernacular. When the brethren had to leave their home in the course of counter-reformation, the chaplains of the fraternity took their copies with them into exile; it probably was the first book they seized and this is the reason why many copies today are scattered over libraries in Germany, Poland, Hungary and other countries. Jesuit missionaries were particularly keen to trace copies of this bible translation during the counter-reformation and many copies were destroyed; yet several hundred survived until today in Czechia and Central Europe.