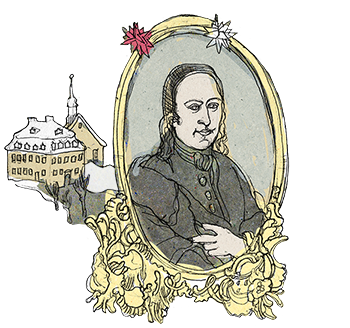 Herrnhut was founded due to the generosity and personal engagement of Nikolaus Ludwig Graf von Zinzendorf. In 1722 he had offered shelter to a group of religious refugees, the “Moravian Brethren”, at his domain Berthelsdorf. The history of Herrnhut, however, starts as early as 1457 when one of the first evangelical churches of Bohemia, the Unitas Fratrum or “Unity of the Brethren” was established. This church was based on the teachings of the reformer Jan Hus, who was burned as a heretic in Konstanz in 1415. Its members decided that only the bible should be the basis of their conduct. During the counter-reformation the brethren were driven out of their Bohemian home. The place assigned to them by von Zinzendorf at the foot of mount Hut they mandated to the “Care of the Lord Jesus” and accordingly called their settlement Herrnhut.