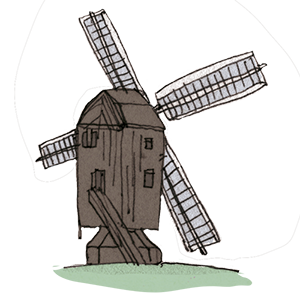 Mills on the move

The last memory of a success story is the ramshackle neon sign of the music store Bading at Karl Marx Strasse. An errant firecracker on New Year’s Eve 2017 destroyed the interior of this traditional store, run with exceptional dedication. Music , however, was not the first occupation of the Bading family; Joachim Friedrich Bading came to Rixdorf in 1743 as a miller; here he first rented and later bought the Deutsche Mühle, a wind mill, and the adjacent miller’s cottage at Richardplatz. In 1771 he also bought the “Böhmische Mühle”, had it dismantled and re-erected beside the Deutsche Mühle. In the late 19th century the Böhmische Mühle was again relocated to Jüterbog.