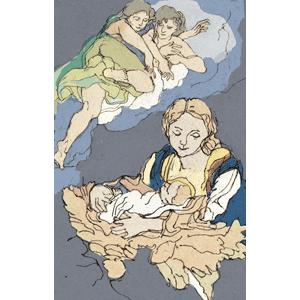 Since September 1746 the “Holy night” by Correggio is in Dresden; a painting that was entered in the register as the “famosa notte” known allover Europe. It was the most famous painting in the Dresden collections until in 1800 the Sistine Madonna took over this position.
The painting refers to an episode from the proto-gospel of Jacobus, an early Christian text dating to the middle of the 2nd century: On her way to Bethlehem, Mary was about to go into labour. Joseph could only find a cave as a shelter and brought Mary there before went searching for a midwife. When he returned, a cloud covered the cave and after it disappeared the cave was flooded with light – so bright that his eyes could not bear to look at it.
Correggio employed this kind of divine luminosity in perfection; however, other painters before him already knew and used the same visual concept.
Merry Christmas!