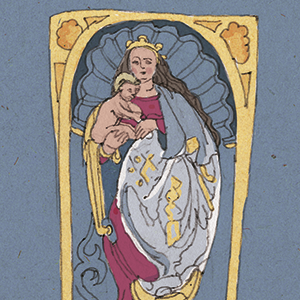 … the rescued soul to heaven springs

How convenient this would be – six ducats for profligate marital life, eight for murder, and despite all depravities the soul still rises to heaven’s gate. Today the Tetzelhaus commemorates Johannes Tetzel, the son of a carter, clever Dominican monk and adversary of Martin Luther. He caused Luther to pen the 95 theses he posted on the doors of All Saints’ Church in Wittenberg because Tetzel with his promises of indulgence drew the members of Luther’s parish from Wittenberg to Jüterbog.
The reformer stands today at the portal of the Church of our Lady in Pirna. The paintings in the vaults are said to be based on illustrations of the passional that was first translated by Luther. Wall paintings dating back to the time the church was built reportedly ridiculed Tetzel and his trade in indulgence; they were removed in the course of renovation work in 1708 and have not been documented. A splendid culmination of late Gothic vaulted ceilings are the reticulated, stellar and fish bladder vaults, ornamental ribs and loops. On the pulpit dated to 1520 Mary cradles the infant Jesus.