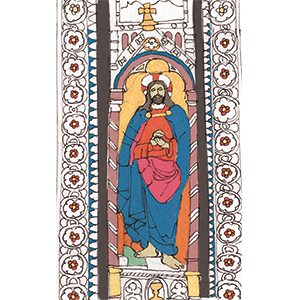 “… doesn’t the old German house fit into the scene anywhere, least of all in Bethlehem […] Do you want to let a donkey and a couple of sheep peek out of the cave so that it can be recognized as a stable?”
Count von Ziethen-Schwerin, chairman of the Jerusalem Association, commenting on the design of the stained-glass windows for the Christmas church in Bethlehem.

Donkeys were struggling to drag the interior of an entire church through the Judean mountains: glass windows, altarpiece, organ and bells for the Christmas church in Bethlehem. Before that, everything was transported overland from Berlin and by ship. In the same year, 1893, the Christmas church in the birthplace of Jesus was inaugurated after only two years of construction. The deep emotional connection and enthusiasm of the Germans for the Holy Land had also taken hold of King Wilhelm IV. In 1841 he founded the Berlin Jerusalem Association whose activities ultimately led to the construction of the Christmas Church in Bethlehem. The respected Berlin architect Heinrich Orth was commissioned to build the church.
Light-coloured limestone blocks are to Bethlehem what red brick architecture is to the Gethsemane Church in Berlin. But the stained-glass windows with their intense colours are impressive in both places: as far as they have been preserved in Berlin, Christ appears there as the judge of the world, while in Bethlehem the whole story of his life and suffering is told. Since both designs were created in Berlin, a collision between traditional European ideas and the scene of the Holy Night at the original location of the event is almost inevitable.