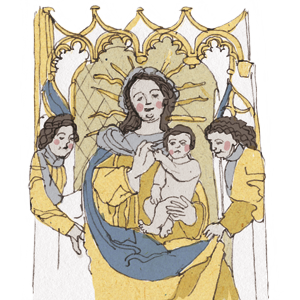 24 days ago the archangel Gabriel kneeled in front of Mary. Now the Infant Jesus has been born and – only a few rooms away – is already sitting on Mary’s lap. The altar from Tyrol was
carved from Swiss Stone Pine wood around 1485 and was added to the collection of the Bode Museum in 1908.
Upper Austria was the home of many winged altars; about 2000 of these Gothic altars once existed. Often these magnificent works of art were only saved due to the determination of an individual. The altar of the cross from the parish church in Hallstatt was rescued by a miner around 1750. Instead of sawing it up as firewood as ordered he kept it aside.
The enormous costs involved with the creation of such an altar were not caused by the elaborate wood carving; the expensive part were painting and gilding. The opulence of these altars can hardly be surpassed; in their original position the altars were part of a total work of art encompassing architecture, painted glass, wall paintings, textiles and the works of gold- and silversmiths.